In ancient China, doctors just had to get that sickness cures, because if they didn’t they wouldnt get paid… They’d be the ones to pay!

Chinese Medicine covers roughly 3,000 years of history (about 2,000 years of written history) and is a medicine that has been practiced widely and sometimes exclusively in countries like the People’s Republic of China, Taiwan, South and North Korea, Japan, Vietnam and Hong Kong. It developed independently of Western medicine for thousands of years and was responsible for treating every disease that was. 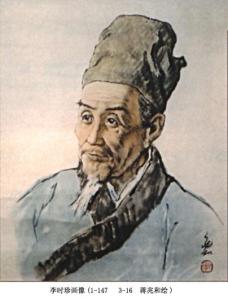 Li Shizhen, courtesy name Dongbi, was one of the greatest Chinese physicians, polymaths, scientists, herbalists and acupuncturists in history.

Li Shizhen was born in Waxiaopa, a small village just north of Qizhou on the Yellow River in what was northern Huguang and is today Hubei Province (see maps, Figure 8, 9).  He was born in 1518 A.D., at the height of the Ming Dynasty (1368-1644 A.D.), which was a time when Neo-Confucianism gained many adherents.  This doctrine emphasized the importance of personal behavior, morality, self-cultivation, study, meditation, and careful thought, while it downplayed the value of crafts and technology, including the practice of medicine.  Neo-Confucianism was to have a significant influence on Li Shizhen’s life.

Li Shizhen’s father, Li Yenwen, had decided to make a better life and became a traditional style (Confucian) physician and scholar.  He was successful at this and attained the rank of a subordinate medical officer of the Imperial Medical Academy.  He was widely respected by his peers.  Li Yenwen is still known to this day for writing the first monograph on ginseng; he also wrote books on the four diagnostic techniques, on smallpox, on pulse diagnosis, and on the local artemisia (used for making moxa) of Hubei.   Despite his accomplishments, those involved with practicing medicine were deemed to be residing low on the social scale even when among the scholarly class.  Li Shizhen, who showed intelligence early on, was encouraged by his father to study the classics, take the imperial examinations, and aim for a government post as a non-medical scholar, the highest attainment possible for someone born outside Imperial circles.  Little is known of Li Shizhen’s brother and sister, both of whom may have led ordinary lives.

So what is Chinese Medicine? It is a comprehensive system of medicine that has developed independently of Western medicine for over three thousand years. It is only in the past three hundred years that Chinese Medicine has been influenced by Western medicine. The five arms of Chinese Medicine are: acupuncture (including surgery, although this is not in practice today), herbal medicine, massage and bone setting, martial and meditative arts (Gong Fu, Chi Gong, Tai Qi) dietary therapy

Among the 5 arms of medicine, dietary therapy is considered the highest form of medicine. We do not know why dietary therapy is thought of so favorably but we think that if a doctor can cure disease through nutritional counseling, the patient gains the ability to cure their own disease and maintain health.

Another important notion of Chinese Medicine is the prevention of disease and maintenance of health. Historically, a Chinese Medicine doctor was paid a retainer to keep their patients healthy. If a patient became sick, the doctor would not be paid until the patient’s health returned. In a similar vein, a doctor that resorted to surgery was considered an inferior doctor. If he/she did their job well and helped their clients stay healthy, there would be no need to perform surgery.

In this modern age, the style of Chinese Medicine that is most prevalent in the United States is based on the medical model of the People’s Republic of China. This approach to medicine is usually termed Traditional Chinese Medicine, or TCM for short.

In China, hospitals include both a Western medicine and Chinese medicine ward. Upon admittance, the staff directs the patient to the appropriate area. It is not uncommon for both modalities of medicine to be administered for a patient. For instance, acupuncture anesthesia may be performed during a surgical procedure. Post-surgery, acupuncture and herbs are administered to speed recovery.

“… unbearable period pains due to Polycystic Ovarian Syndrome… my response to the treatment was nearly instant and results unbelievable.”